All new songs.  Release will be in September 2019.

Happy New Year to all friends, fans and followers!!

I hope 2019 will bring light to these Dark Times.

I am delighted to let you all know that, in January, The Doctors

of Madness return to the recording studio with world-renowned 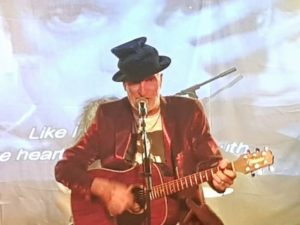 Since the band was first unleashed on an uncomprehending public in 1975, Strange has been a Zelig-like figure whose presence has been felt in every corner of London’s cultural life. He founded the hugely influential mixed-media Cabaret Futura in 1980, and has subsequently worked as a musician, writer and actor.

His numerous movie appearances include Batman by Tim Burton, Mona Lisa by Neil Jordan, and Gangs of New York by Martin Scorsese. He can be seen in the Harmony Korine movie Mr Lonely, playing the part of Abraham Lincoln, and he recently filmed the last episode of Harry Potter.

In 2009 he was part of Jarvis Cocker’s Meltdown Festival, at the RFH, in an evening of songs from Walt Disney movies, and in 2010 performed with the producer/arranger Hal Wilner in Brooklyn and at The Barbican, alongside such luminaries as David Byrne, Tim Robbins, Steve Buscemi, Shane McGowan and Suzanne Vega.

Richard’s memoir “Strange- Punks and Drunks and Flicks and Kicks”, was published to critical acclaim by Andre Deutsch in 2005.

If you have never heard the Doctors of Madness, you should. Musically they are the Velvet Underground, New York Dolls with shades of glam, hippie, prog and punk all rolled into one, yet are still totally original. Vastly underrated, they should have been huge. Pure genius.