Language Is A Virus From Outer Space

Language is a Virus From Outer Space. 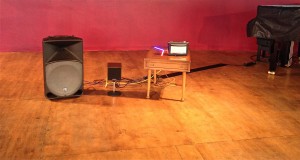 Last Saturday London’s Southbank Centre witnessed a spectacular centennial celebration of the esteemed Beat writer William S Burroughs, entitled Language is a Virus from Outer Space. Organised by the legendary rock musician and impresario Richard Strange, it was an ambitious event consisting of a diverse range of performers paying homage to WSB and culminated with the world premier of Gavin Bryars cantato of the same name (more on which later).

Ironically although the show was one of the best I’ve seen at the Southbank in many years, my favourite contribution was to be found in the foyer, in the form of Haroon Mirza’s Falling Rave, a sound installation piece that really did seem to be channeling signals from outer space. I happily sat listening to this for at least half an hour. But soon it was time to enter the theatre and it was not long before Dr Benway arrived to introduce the proceedings. 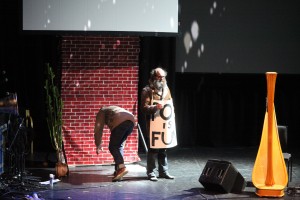 The first act by the Anni Hogan Trio was a very evocative musical performance that set the scene perfectly with its experimental ambience. 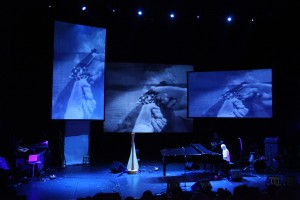 Though this was immediately contrasted by artist Gavin Turk’s slapstick interpretation of Allen Ginsberg’s ‘Pot is Fun’ demonstration.

The essential Jeremy Reed and Ginger Light then performed an intriguing WSB Trip-Tick poetry performance. Anyone whose seen Jeremy’s performances before will no how well he evokes the hippy performance poet! 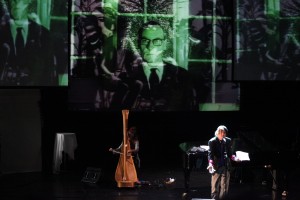 But for me the best stage event came up next, when the sound artist David Coulter teamed up with drummer Seb Rochford (Polar Bear, Acoustic Ladyland) to produce two mind blowing psychedelic pieces The Branch and the Bundle and The Silence is Frightening. Ending in rapturous applause from the audience. This was followed by Bill Nelson’s equally trippy video Artifex, a kind of nuclear cowboy flick with a strong Burroughsian essence. 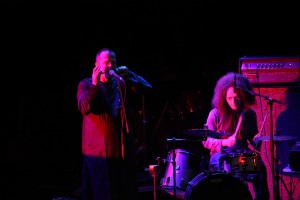 The first half ended with a roof raising performance from Strange’s reformed proto punk band, The Doctors of Madness, climaxing with one of their best numbers, Suicide City, with Def Leppard’s Joe Elliot a surprise special guest singer. The songs lyrics being one of the bands most successful cut ups. Richard can certainly still kick up a storm, and put many younger, ‘ageing rockstars’ to shame! 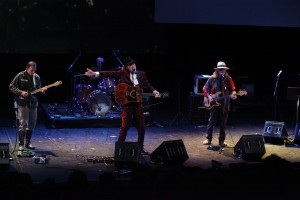 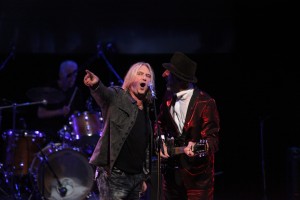 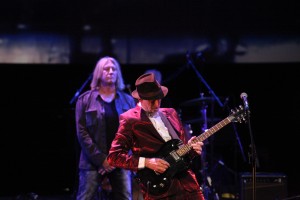 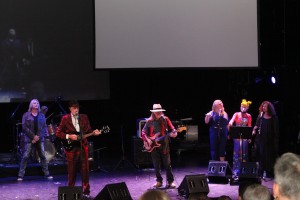 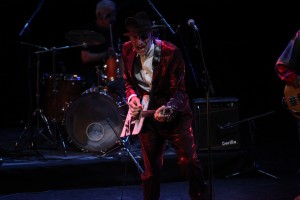 This first half could be said to have very little to do with Burrough’s actual life or works, other than being broadly Burroughsian in varying degrees, though Jeremy Reed evoked aspects of Burrough’s life and interests in his performance piece, and WSB’S images and words were ubiquitous in the continual back projections. This was less true of the second half in which we heard and saw much more of Mr Burroughs. Starting with an acrobatic dance by Eryck Brahmania to the recording of We Are All Here To Go (choreographed by Luca Silvestrini). 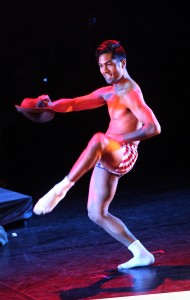 Eryck Brahmania
An act with a distinct homoerotic element he would have no doubt appreciated.The duo Raf and O followed with some more Burroughsian music entitled Dream Machine bringing the show back to its high quality musical base. 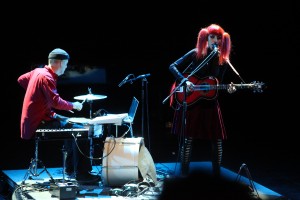 This was later continued with extracts from Tom Wait’s The Black Rider, based on the book by WSB, performed by Richard Strange and a band assembled from the original production’s band. 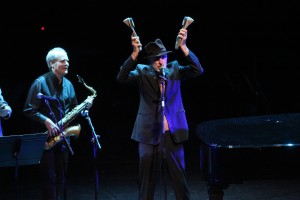 Then we heard the deeply moving reading A Few Words From Mrs Buroughs, by Rupert Thomson, which captured the last few hours of the couple together, including her fatal shooting by Burroughs in a botched shooting game. A very evocative piece of prose that moistened more than a few eyes.It also recalled the strange event of Burroughs inexplicably bursting into tears for no apparent reason, shortly before her death which would affect him so deeply. A sign perhaps of the psychic receptiveness that he attributed all his work too. 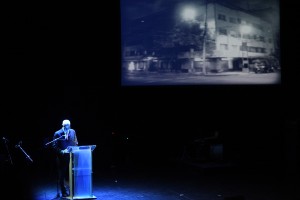 This theme also featured strongly in Richard Strange/Gavin Bryar’s cantata, where the shooting accident was symbolically carried out, with the actress Sarah Jane Morris putting in a fantastic performance as Joan Vollmer Burroughs. Actor Richard Durden made a fine WSB, sitting at his typewriter producing the classic Burroughsian insights, with sound bites of the man himself played from the side stage. Backed by psychedelic back projections and an orchestral accompaniment from We Are Children this was a spectacular performance piece, climaxing with the angel of death and a procession of WSB guitarists descending from the audience onto the stage. A theme here seemed to be that Burroughs had constantly wrestled with the death of his wife through out his career and this had shaped much of his work. In a sense he became death, or as he put it an assassin of the apocalypse, darkness in the service of light. Suitably Burrough’s later Occult influence from Aleister Crowley and Chaos Magic was also referenced, including a huge a very familiar projection of Baphomet. At the end of the performance the audience were encouraged to don UV flourescent masks of WSB that had been handed out in the interval, reflecting the Burroughsian presence back at the stage. A standing ovation followed the show, as the cast and performers were reassembled for their curtain call, the energy from which was intense. 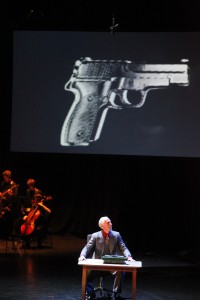 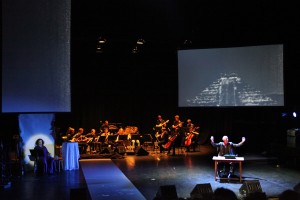 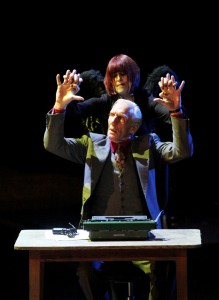 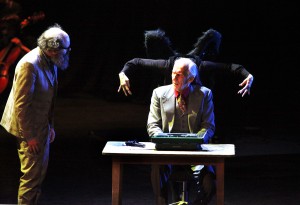 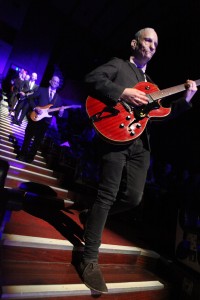 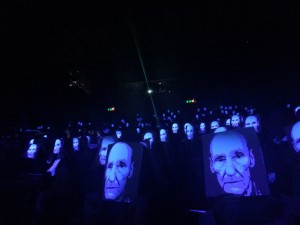 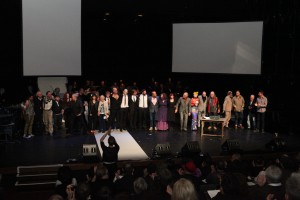 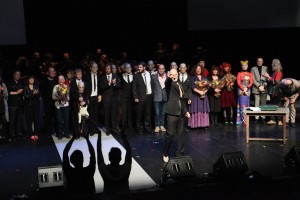 Scenes from the Richard Strange/ Gavin Bryars Cantata “Language Is A Virus From Outer Space”
Photos by Christina Jansen, at www.cjansenphotography.com